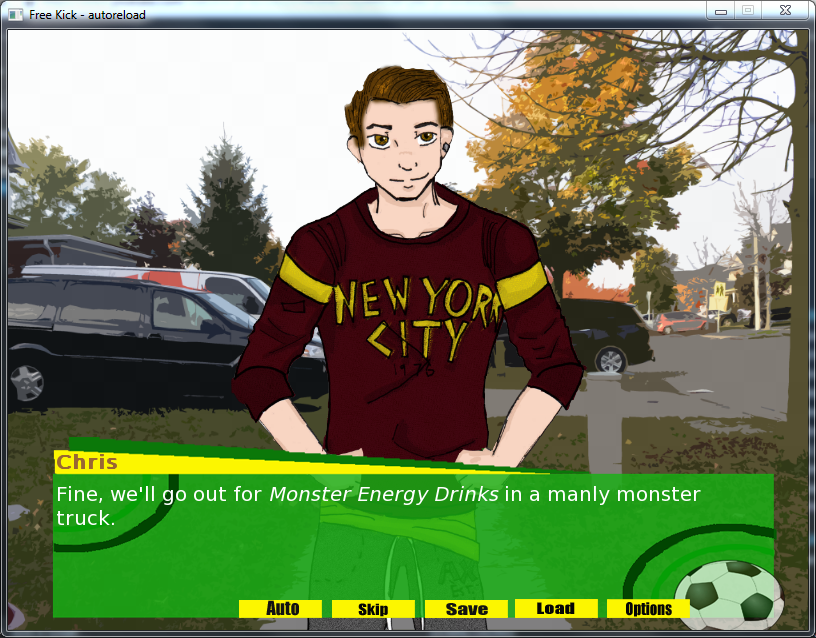 We had a terrible snow storm over where I live. So I got the day off. Spent some quality time with the boys of Free Kick (mainly Chris) and worked on some coding.
Posted by Unknown at 16:11 No comments:

Free Kick will be going on a small hiatus until the end of January-Mid-February. I have exams coming up so I have to focus on those.

I have been working on some of the storyline for Free Kick (and the writing), but I haven't had the chance to do any coding lately.

Cheers!
Posted by Unknown at 17:57 No comments:

First Impressions are Everything 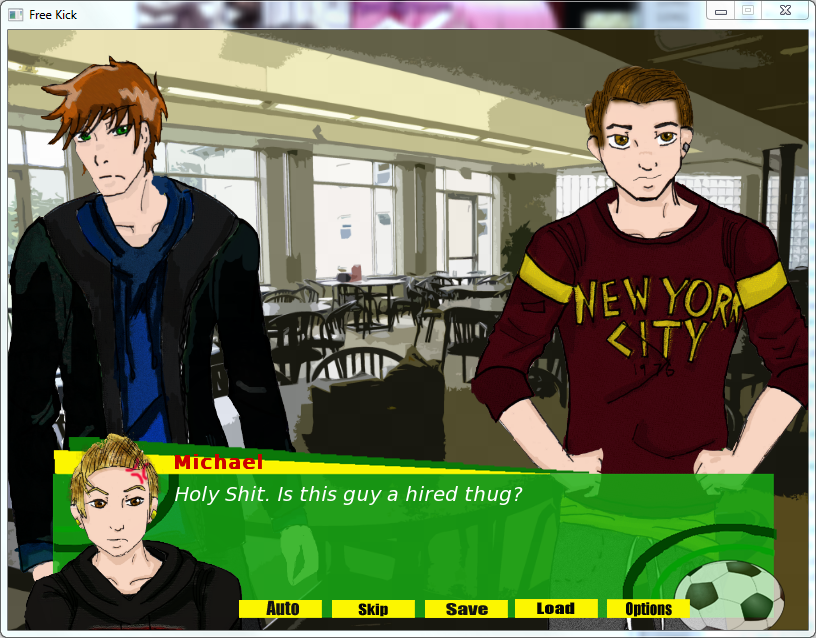 I worked on Free Kick a bit today-If all goes well I should be releasing a demo in a couple months. (Cross your fingers). I had to fix some bugs. I like to test as I go along. I had to fix some issues that I had with the variables.

In Python, when you assign a value to the variable you use '=' however when you want to CHECK or TEST if the variable is equal to a certain value you have to use '=='. (it's the same in Java) but for some reason it slipped my mind. Well, It's all fixed now!

Ps. Happy Belated Holidays! (Well I guess technically the holidays are still in motion for some of us) I hope it was (and is) a fantastic time for all of you! I hope you had a fantastic Christmas and Boxing Day.
Posted by Unknown at 21:47 No comments:

And What's a School without Teachers? 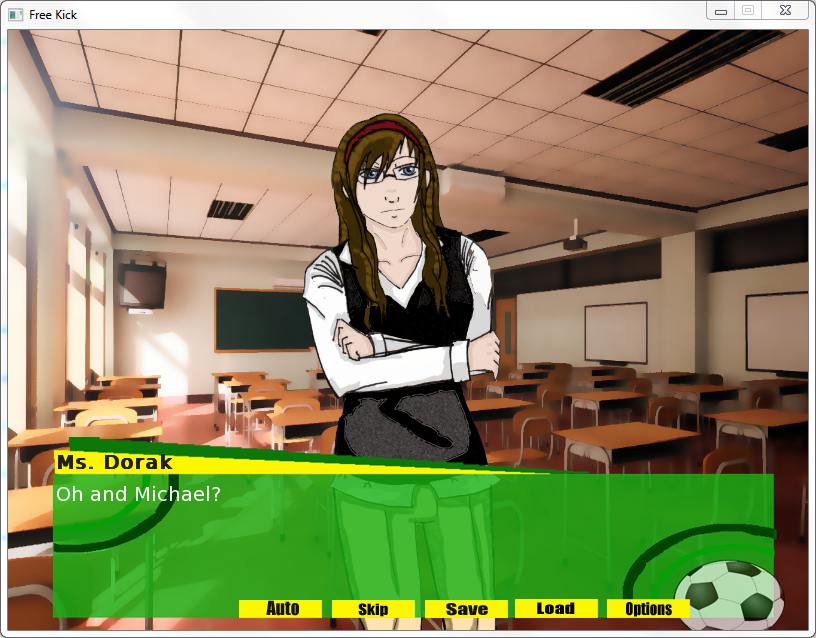 Ms. Dorak, your (favourite?) and only English teacher. She shall grace you with the wondrous workings of Hamlet and other literature that has no real world application.
Posted by Unknown at 21:38 No comments:

Yes. There are Female Characters 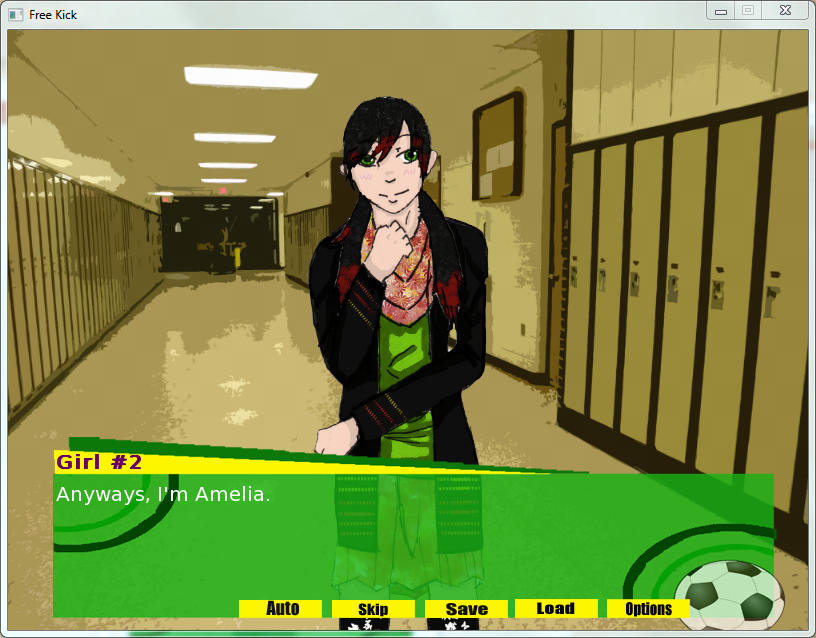 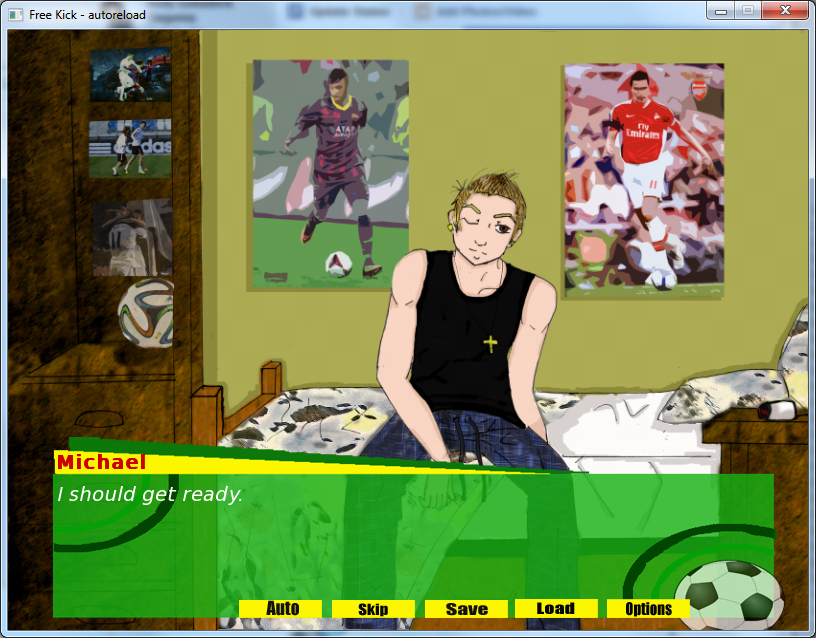 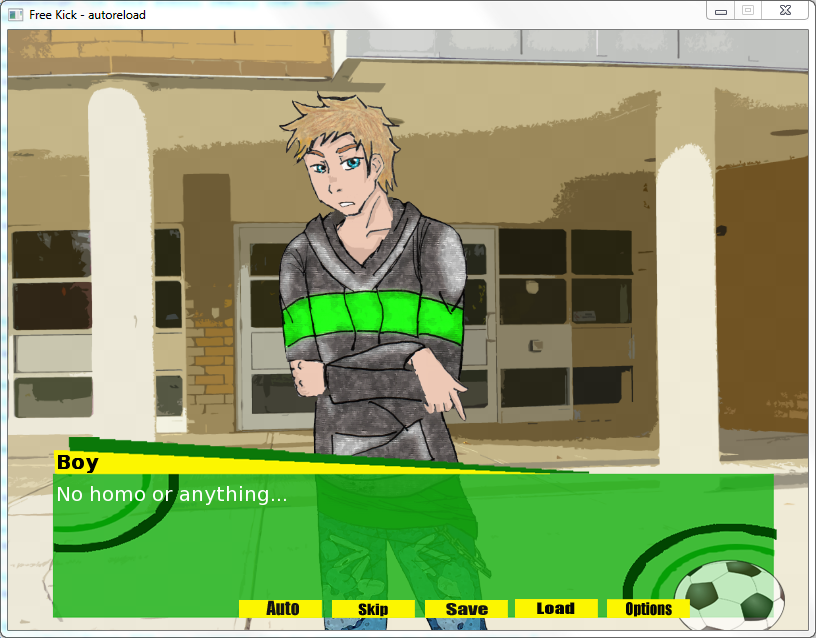 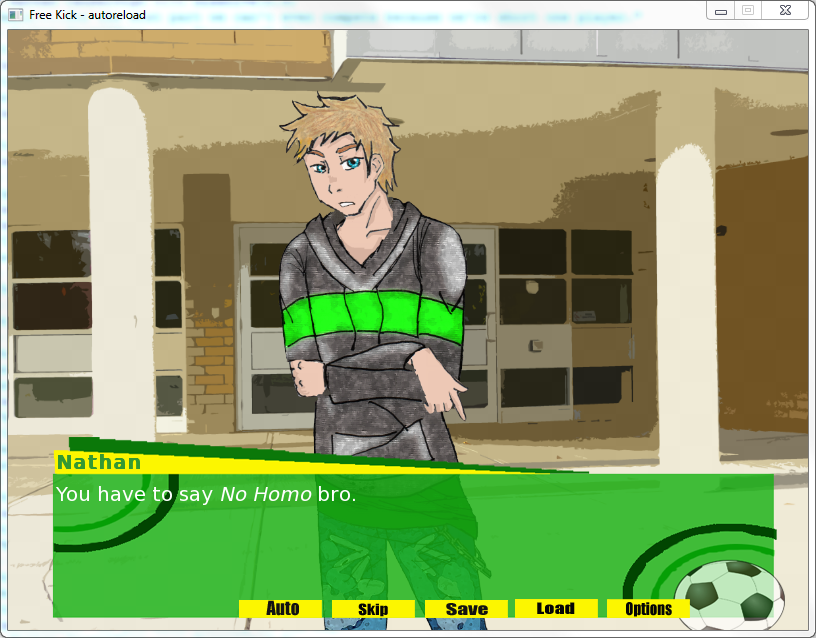 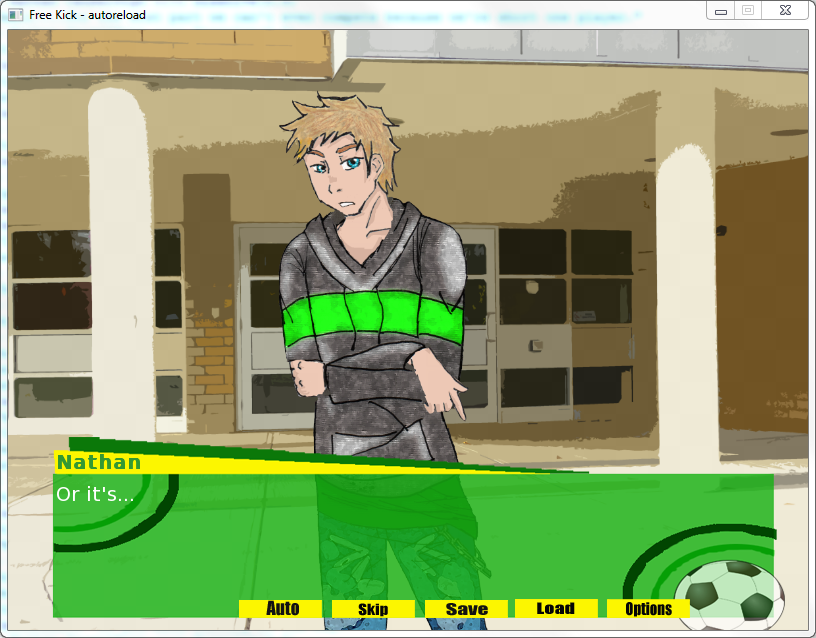 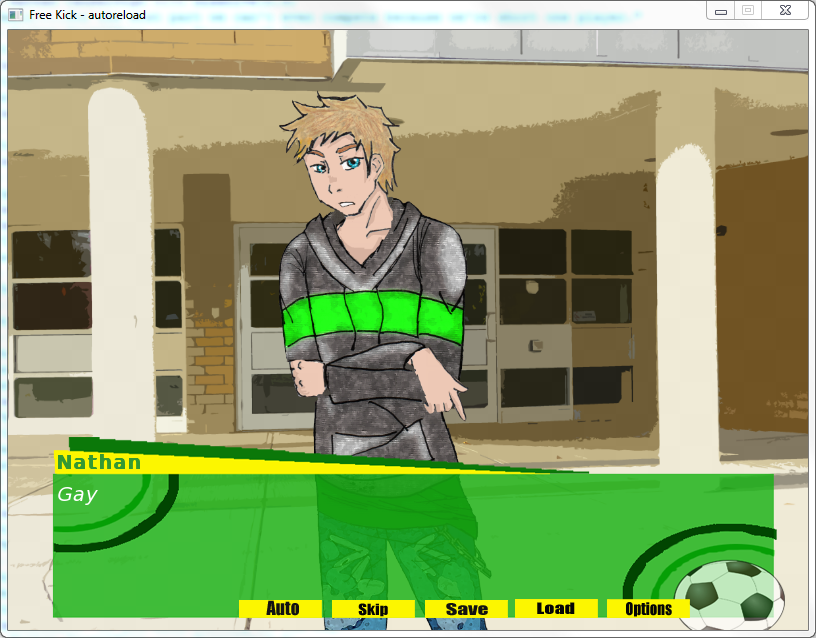 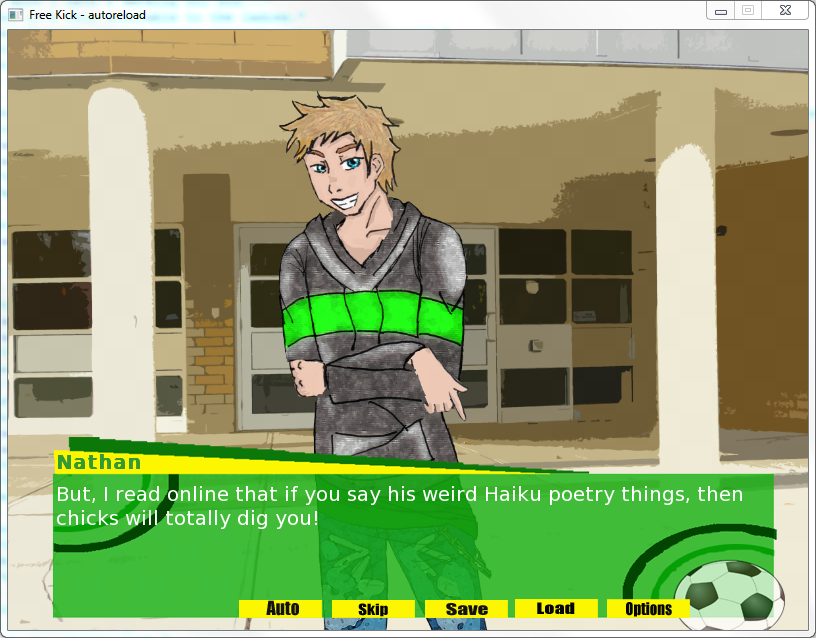 I have been working on the game.

Just created the part where Michael first meets the strange boy known as Nathan.
Tried to stick with the idea that most young men are very insecure about their sexualities, the use of the word 'gay' is not meant to offend in this case but to paint a realistic picture about how the word is used in today's modern society.

Fun fact: I actually got inspiration for Michael's room from a University residence that I visited some time ago.

Officially completed the GUI (Graphical User Interface.) I decided to stick with the school team's colours for effect. 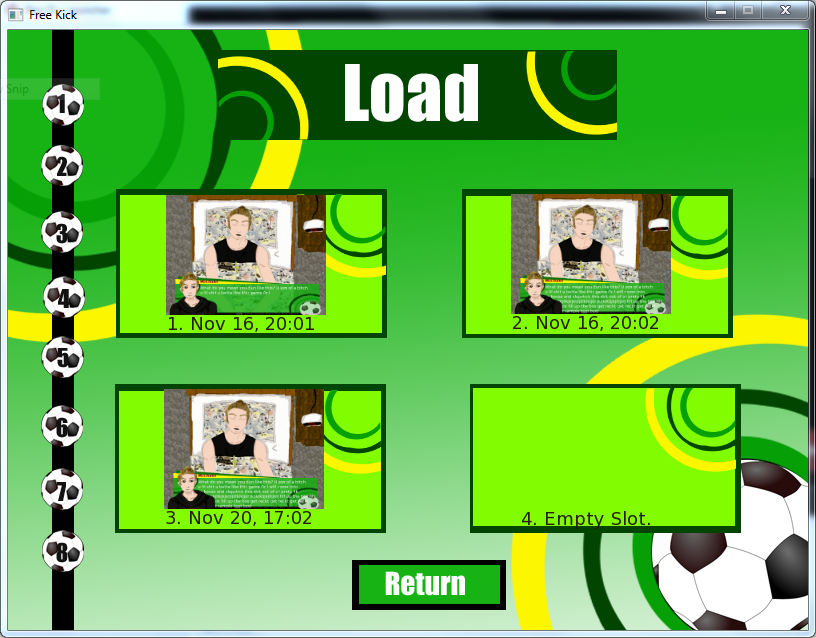 The Load/Save Screen (The screen same is the exact same except it says "Save." (Wow what a plot twist)) The most challenging part was figuring out how to re-size the screenshots (I didn't realize that you had to resave the game for the screen shot to take effect) 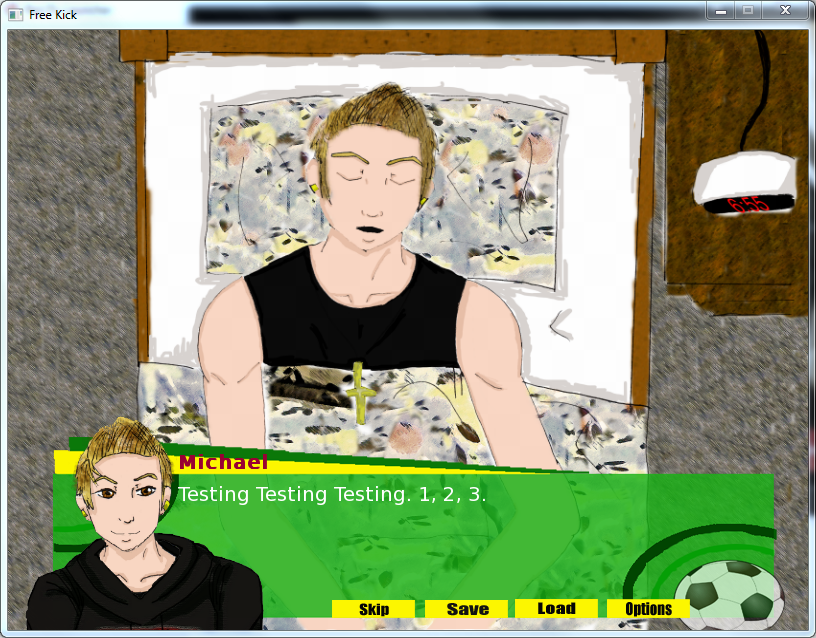 In game Menu and Dialogue box. I re-did the in game menu about 3 times because I wasn't happy with the positioning. I originally had it at the side, but I thought it looked better at the bottom. I also coded in a side image (For our main character). Text colours and name colours are not final (Will probably be changing it at some point) 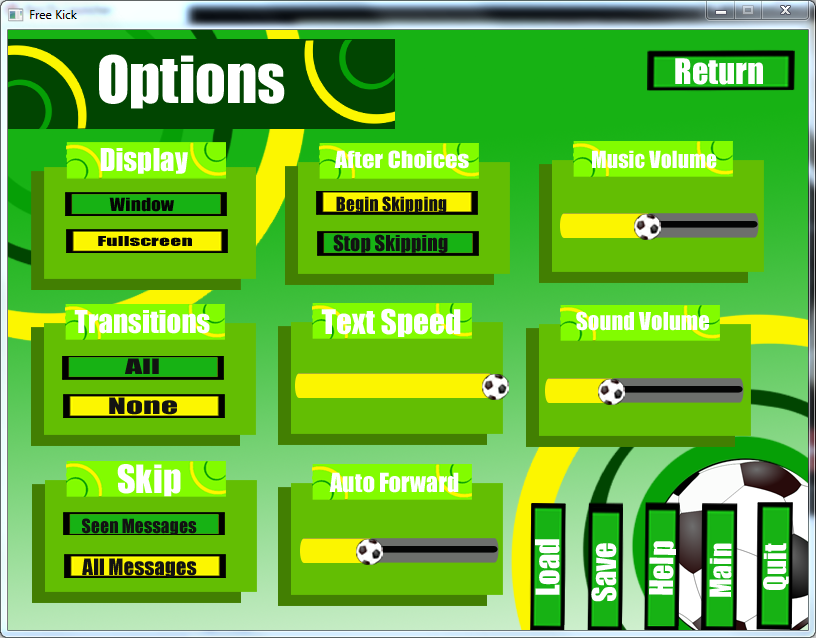 The options screen. I am so happy with out it turned out. Took two imagemaps to make it (One for the menu, another one for the actual screen) made a separate slider bar and positioned it-the slider bar (Which you will see below Text Speed, Music Volume, Auto Forward etc.) was actually a combination of three images.

And of course, we have the Yes/No Prompt screen which pops up to confirm various actions (overwriting a saved game...quitting etc.) Of course you'll never want to quit free-kick. Ever. Mwahahaha. 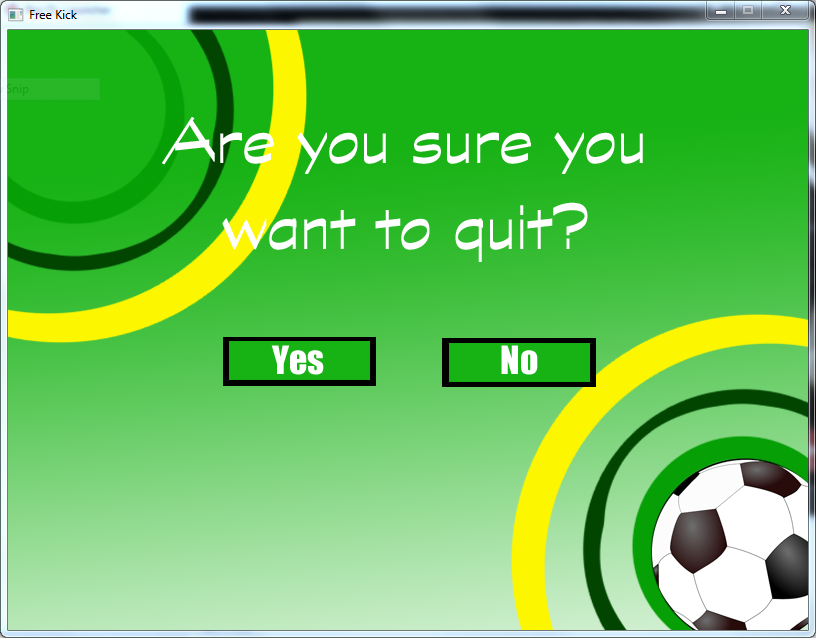 All I really have to do for the GUI now is the choices buttons. I'll work on them when the time comes.

Next, I'll have to edit some backgrounds, import the images-possibly create some new expressions, come up with the basic storyboard (what images I will use) for the first couple of scenes, and then I'll actually start making the game....

At least the GUI is done. That's the hardest part. (I think)

*Falls on floor.* I'm done. Until tomorrow at least.
Posted by Unknown at 19:22 No comments: